When I first wrote My Daily Fix: Introduction, I planned to introduce daily dramas in general, then my current obsession Can’t Live Without You.  The original plan was to do mini recaps of the show, since they’re easier to handle (and in smaller bites, too) than the twice-weekly primetime shows.  But as I was going through my cache of dramas and pictures and OSTs and whatnot, I realized there are so many dailies I’ve watched that I wanted to talk about…  Maybe I’ll just do holistic reviews of dailies?  Or stick to the original plan of weekly CLWY reviews?  I’m the most indecisive person on this planet, so if you’d like to help pinkblossom find her way out of this Indecision Forest, please vote and/or leave a comment!

Now, back to my faaaavorite addiction these days:

Can’t Live Without You has an AMAZING cast: Kim Hae-sook, Park Eun-hye, Kim Ho-jin, Park Sun-young, Park Yoo-hwan, Yoon Mi-ra, and many more.  I can’t wax enough about how great Kim Hae-sook and Yoon Mi-ra are together (they’re bickering girlfriends who are gonna be in-laws), how cute Park Sun-young is, and how SQUEEE Kim Ho-jin is.  The show, unfortunately, hasn’t been doing too well ratings-wise (5-6% range), but I love it dearly, and perhaps I can convince you to jump aboard this Rollercoaster!

Kim Family: Kim Poong-ki is married to Jang In-ja and they have 4 kids: Sang-do, Doh-hee, Min-do, and Chi-do.  Sang-do is married to In-hye and they have a son named Ki-chan.  Doh-hee is a nurse who’s secretly caring for President Min while acting as a secretary.  Min-do is in the film industry.  Chi-do is a judge who’s a half-brother (via Dad) to the aforementioned three siblings.  In-ja really does love Chi-do like her own son, but things can never be 100% comfortable…

Lee Family: A chaebol family that’s in the food industry, banking, and who knows what else.  President Min is widowed and has 3 children.  Hyun-tae is the second child and works at a bank, but he’s constantly pressured by his mom, President Min, to take the helm at the main company.  He has a married older sister (who works at the company) and a younger sister who’s a judge (friends with Chi-do, of course).

Min Family: Lee Mi-ja is a widow whose late husband was the older brother of President Min.  Mi-ja has one child, daughter Ji-soo.  The two live with Mi-ja’s younger sister Yeon-ja.  Mi-ja is old school “friends” with In-ja.

Min-do and Ji-soo: She’s a successful doctor and older, he’s in the film industry (implied: not exactly the ideal son-in-law).  Long story short, they attempt to break up but can’t because they love each other too much and Ji-soo refuses to give him up.  Parents go beserk, especially Ji-soo’s widowed mom who wants nothing less than a successful attorney for her daughter.  More crying and screaming and as of Episode 42, the couple are getting married (tomorrow!) and are being as lovey-dovey as possible.

The other people: there are lots of side storylines that’ll develop as we go along, so I won’t go into them now.  Instead, let’s proceed onto my favorite(!!) storyline: 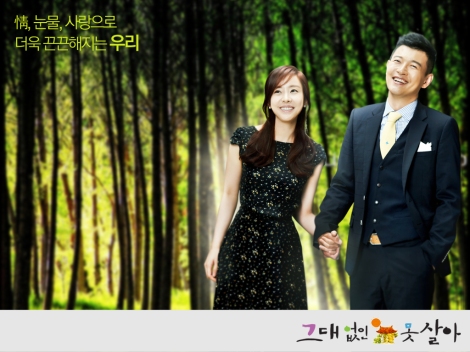 In-hye and Hyun-tae and Sang-do: The two guys were best friends since high school, and the three are also close.  Hyun-tae recently divorced Ji-eun (So Yoo-jin) and came back to Korea.  Sang-do decided to go crazy and cheat on In-hye with his first love Sa Ga-young, who dumped him without notice and married another dude.  She, too, recently got divorced and now wants Sang-do back.  Yeah, “Oh My GAWSH she is one miserable excuse for a human being” is just about the best description.  Hyun-tae has tried to be the voice of reason but Sang-do is having none of it, and two weeks ago the shit hit the proverbial fan.  In-hye found out, had an awesome showdown with Ga-young, and is struggling to keep it together.  The best part?  Sang-do and Hyun-tae had a huge out-and-out and Sang-do accused Hyun-tae of STILL being in love with In-hye.  WHAT, WHAT?  YEAH YEAAAH!!

And then, on top of that, Sang-do said he’s gonna follow his heart aka Ga-young:

Sang-do: I’m not like you [Hyun-tae] who gave up love for friendship.

No matter how “sweet” a person’s unrequited love may be, though, I don’t do home-wreckers.  And Hyun-tae would have been one if he’d confessed to In-hye or somethin’ stupid like that.  But he’s always been a perfect gentleman, kind friend, and the one person In-hye could turn to when Sang-do was conspicuously unavailable or straight-up being an a$$.  Still, I wouldn’t have approved of anything between the two if Sang-do were happily married to In-hye.  During the first twenty-some-odd episodes, I wondered how the Hyun-tae + In-hye pairing would come about because Sang-do + In-hye seemed genuinely happy together.  But now that the cheating bast*$!# has been outed and he’s determined to divorce his wonderful wife, I’m SO excited for Hyun-tae + In-hye.  Hyun-tae has NEVER done anything to disrupt his friend’s marriage, and he continues to reassure In-hye that Sang-do will come back to her.  But Sang-do has just gone completely nuts, so I’m all for Hyun-tae.  Plus, it’s just ADORABLE how Hyun-tae’s whole face lights up like CRAZY whenever he’s around In-hye.

Some peripheral complications: (1) Hyun-tae’s ex, Ji-eun, wants her hubby back.  She’s the daughter of a chaebol and business partner of the Lee family, so parents want the kids back together.  (2) Doh-hee has had a crush on Hyun-tae since forever.  Sister-in-law rivalries are never pretty.

A few possibilities in the future:

For watchers, do you have any predictions for the future?  Who’s your favorite couple/character?  And for those who aren’t yet watchers: Hope you join me aboard this Rollercoaster!  We’re just getting started, and it’s gonna be a blast!!

5 responses to “My Daily Fix: Can’t Live Without You”