Can I say that our Bahksa Ahdeul Jung Shi-hyun having issues is the biggest understatement of the year?  Lovely Patch Friend dedicated took me up on using our Heartless Patch as grounds for lively debate and discussion with some great thoughts and insights into the issues surrounding the ending of Episode 14.

I don’t get why it was that earth shattering for Shi Hyun to find out that his mother was a distributor. He knew she was a druggie and was prostituting to earn money for themselves to live and for her drugs. So with that mind set it was highly possible that she would take part in distribution to make some more money for the drugs. Besides distribution is what Shi Hyun himself has been doing for the past 8 years and and now he wants to extend his business by producing too. What is the big difference for him finding out that his mother wasn’t just a user but also a distributor? I don’t get why he would harm himself over it.
For me it is also not plausible that he has had a vendetta against Safari, because he has thought that Safari had sold his mother drugs and had made her into an addict. Shi Hyun’s mother was an adult and she could have decided for herself to use or not use drugs, like his Auntie, who is also working in the same business line but not using drugs, or Safari or Soo or he himself, they are in the business but did not become addicts themselves. So if Shi Hyun’s mother had become an addict, how could have that been Safari’s fault? Why would Shi Hyun accuse him of murdering his mother?
All his life he has been distributing that poison to others, like Safari said. What makes him think that his mother was innocent by just using the drugs and not distributing them? Let’s say, he thought his mother was just a cornered user, who did not know any better, why has he been doing that kind of dirty work then?
If he thought that it would be okay, because he was an undercover cop and was sacrificing little fish in order to catch the bigger drug lord, so he became an underling for them to trust, so he could rise above them and put them in jail, what happened to all the people, who bought their drugs, became addicts and maybe died because of them? Do their deaths not count? Or does he take them as casualty? Why would his mother be then special? Just because she was his mother?
And at the end, if he regretted his deeds and thought of himself as the reason of his mother’s demise, why did he decide to go to the dark side?

So much goodness!  I started replying, and then realized there was no way all of my long-windedness was gonna fit – or look good attempting to fit – on the page.  Thus I present to you… even more words! 😀

Shi-hyun is in no ways innocent, nor should he be absolved of his crimes simply because he’s shmexy and drool-worthy and our hero(?).  He’s a very veeery flawed individual, but I think that might be part of what makes rooting for him such an interesting experience.  The “good guy” is Ji Hyung-min, but we find ourselves desperately hoping for Shi-hyun to outwit him time and again.  It’s not just because Shi-hyun is an undercover agent, thus technically a “good guy” – we, as an audience, were supposed to like him even before that big reveal in Episode 4.  And let’s be honest – even if he hadn’t been an undercover cop, we would have rooted for him.  Prime example: Safari.  Yeah, we later learned he was also (initially) an undercover, but we loved him for being a clever bad guy.  Those flashbacks into the past certainly put a different light on him, but half of his appeal was his ruthlessness.  These are all bad people, yet we want them to win.  Strange, no?

Now, Shi-hyun is very much aware of who he is, but somewhere along the way, I think he pushed aside what exactly resulted from the dirtying of his hands.  He’s a good guy trying to bring down the bad guys, and in the process he did a LOT of bad things.  He paid for his current position with eight grueling years of inhuman existence, and somewhere along the way, he probably justified his dirty work with the reminder that this was all for the greater good.  Do I think it’s right?  No.  But he couldn’t exactly pretend to distribute drugs, and I think he chose to shut that door on his conscience and just charge ahead.  When Safari jerked the chains around that tightly-locked door, noting that Shi-hyun was no different from him, Shi-hyun visibly flinched.  So he’s not unaware of his own crimes.  He just… doesn’t like to think about them.

If he’s willing to ruin others’ lives, why does he hate Safari with such a vengeance?  Why is it such a shocker that his mom was a distributor?  I think the simplest answer is ultimately the best answer: Because she was his mom.  There’s no logic to family ties and that thing called jeong (정), and there’s no scientific method behind development of love for our parents.  And for Shi-hyun, the poor child who had no father, his mother was his whole world.  Though he may physically be a grown man, though he may intellectually be far above anyone in his circle, he is still a young child in the emotional department.  His mom died when he was a little kid, and I think he stopped emotionally growing the moment he grabbed his mom’s measly wad of cash and bolted from the slums.  He doesn’t logically think “Perhaps my mom could have said no to Safari.”  All he thinks is (1) my mom died of a drug overdose; and (2) Safari gave her those drugs.  Chief Min is largely to blame here – he knew where Shi-hyun hurt the most, and he hit him hard.  He was like the devil whispering in the little boy’s ear, providing a target for the pent-up grief and hatred to be directed at.

From that moment, Shi-hyun has had one goal: Avenge my mother’s death by hunting down Safari.  If bringing down Busan is what’s needed to fulfill that goal?  No problem.  Like a horse wearing blinders, Shi-hyun has never looked anywhere but forward, has never thought of anything but vengeance.  He built his whole world on that one goal.  But all of that came crashing down with the revelation that his mom wasn’t a victim of Safari.  And to make things worse, he finally remembers being a cog in the drug machine.  Though not entirely true, in his mind, he essentially killed his mom by facilitating her drug use and distribution.  (Hence the agony and disbelief on his face as he stares at his hands – they which delivered the goods from Safari to his mom – and the smashing of the rock on them.)

Whether Shi-hyun has officially gone over to the dark side will be the big question this week.  And if he has, I think it’s a combination of so many different things.  The biggest, though, is his severing of ties with Chief Min.  It’s not so much that he’s no longer a good guy, it’s that he’s done being Chief Min’s puppet.  The man has been egging him on from the start, and everything started with his big fat lie about Safari and Shi-hyun’s mom.

The bottom line is that Shi-hyun is very much alone.  And yet… perhaps he has more friends than he ever thought he had.  *whispers: Episodes 15 & 16!*  Only time will tell. 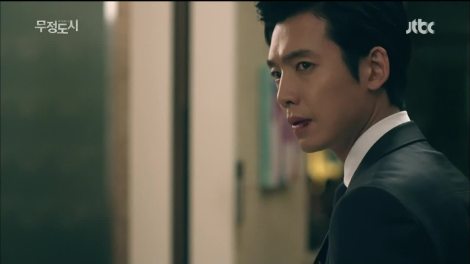 4 responses to “Heartless City: Shi-hyun and His Issues”