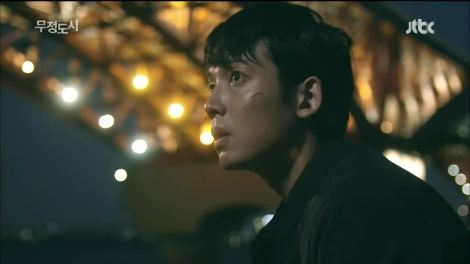 My vocabulary just cannot hold up in the face of Heartless City’s continuing amaztasticness.  It just gets better and better every episode, every week, and I have no words to express such prowess.  I mean, you can only add “super” so many times in front of “daebak”.  I don’t think “super super super daebak” quite captures the step up from “super super daebak”. 😉

This thing called time is such… a strange thing.  Sometimes, I need to give myself a bit of time to process what just went down, to organize the whirl of emotions and thoughts.  But oftentimes, those initial feelings and exclamations dissipate with the passage of time…  Though I don’t doubt that I certainly held strong feelings, the intensity isn’t quite as rational or fathomable after a good night’s rest.  So the question remains: Should I give myself time to think?  Or not?

And then we’ve got the added complication of Heartless City’s continual move up, its indefatigable racing up the mountain of intensity and mind-bending acrobatics.  I’m blown away by Monday’s episode, and then I forget all about it in the face of the blown blooown away state I’m in after Tuesday’s episode.  Why make life so difficult for this Gardener, Heartless City?

The Basics of Episode 14

Shi-hyun drops off Soo-min and tells her to stay away – she’s now in danger because of him.  He gives Hyung-min a call and attempts to protest his innocence regarding Kyung-mi’s death, but Hyung-min ain’t having any of it.  So instead, Shi-hyun offers the hotheaded cop a chance to catch him: “Come to where I am.  Now.  Don’t forget.  Because I don’t want to die at someone else’s hands (other than yours).”

Aaaand Shi-hyun goes right back to Chairman Cho. *disbelieving laughter* Can’t accuse the guy of being chicken, that’s for sure.  Basically, Shi-hyun uses himself as bait for Chairman Cho, even kindly providing 3 kg of meth to be found on the scene.  Gotta love a helpful guy.  The best part, though?  Shi-hyun ripping off his suit jacket in the middle of the battle – and then shrugging it back on. *swoon* (0:48-0:57)

Alas, Chairman Cho’s under-custody stint lasts all of one night – maaaybe two? – as expected, thanks to Papa Ji pulling his strings.  I really wonder who’s behind our Attorney General Ji… surely he’s not operating on his own… right?

Chief Min rips off Shi-hyun’s head for ‘turning in’ Chairman Cho, reminding him that his duty was to “find Chairman Cho’s weakness.”  I don’t know what his obsession is with Shi-hyun entering the Busan Organization, but it’s really quite worrying.  There ain’t a single person you can trust in this lineup.  Shi-hyun, despite knowing that he can’t win, still gives the all-clear to his peeps to stage war against Busan.  Rather than just distributing, they are now going to manufacture the goods as well.

Safari pays Auntie a visit, and he asks her to lay the bridge of reconciliation and beautiful living (heh heh heh) between him and Bahksa.  But Auntie is through with him, and Safari finally acknowledges it.  It’s such an awesome scene – neither of them says a word to each other, but they both know it’s over… his love for her… all those years spent together… everything is now officially history.

Papa Ji hints to Prosecutor Ahn that President Jung may in fact be Bahksa (eep!), and Hyung-min uncovers Ahn’s mistress Joo-young, whom he recognizes as Soo-min’s friend.  Yikes.  The noose around our poor Bahksa’s neck is slowly tightening, inch by inch.

In an interesting parallel, reporter Cha Hyo-joo (Song Min-ji) waits for Hyung-min, while across town Soo-min waits for Shi-hyun.  Both men show up but remain hidden, the former at least conveying his regrets for having to stand her up tonight.  Soo-min wallows in self-pity and sobs to Joo-young, “I must really love him.  I want to see him so much…  What do I do if I can’t ever see him again?”  Our Bahksa don’t need no complications, girlfriend.  Back off.

Bowing to Bahksa’s requests, Soo lets Kim Bbong go (they had him in captivity), but the loyalty-gene-lacking man merely neatly falls into Bahksa’s trap.  Alas, Safari recognizes Kim Bbong is being used as bait and prematurely ends what would have been an iiinteresting meeting.  Instead, Safari – who learned that Shi-hyun and Kyung-mi grew up together in the orphanage – tells Bahksa over the phone that Chairman Cho was the one who killed Kyung-mi.  That sends Shi-hyun off his rocker, and the two finally meet at their old spot next to the Han River.  Uh, just in case you two didn’t know, that’s the meeting spot for every person and couple in every Kdrama ever.  Just wanted to let ya know.

Safari and Bahksa seal the deal for an alliance in the war against Busan, and then things take an ugly turn when the topic of Shi-hyun’s mom is brought up.  Shi-hyun demands to know why Safari killed his mom, which is news to the grizzly mastermind.  He points out that Bahksa ain’t no different – the drugs he supplied probably ruined lots of lives – but then he drops the bomb: Mama Jung was a middleman of sorts – she took the goods from Safari and distributed them in the red light district. *shocked silence*

Safari leaves Shi-hyun reeling, and old memories finally begin to surface: Shi-hyun delivering a small package to his mom from Safari; his mom pouring white powder into small plastic pouches; and then the flashback to the night he found his mom dead.  He stares at his hands, they which essentially (at least in his mind) brought about the death of his mom… and smashes a rock against one, weeping in agony.

Shi-hyun meets Chief Min and numbly confirms that his mom died of a drug overdose.  “Okay,” he responds and listlessly gets up to leave.  Chief Min stops him, calling out, “Shi-hyun-ah.  Is it too difficult?  Even Chairman Cho was released – I’m worried for you.  If it’s too much, just let me know.  You can return to the police.”  Shi-hyun retraces his steps to grab Chief Min by the lapels and demands, “Why?  Why are you doing this to me?!”  He cuts off Chief Min and screams, “Don’t call my name!  I am Bahksa Ahdeul.  Now…  It’s over now.”

Gasp!  Has Shi-hyun officially joined the dark side?!?!  Gaaaaah!!

Bit by bit, Shi-hyun’s world has been crumbling over the course of this show, but the revelation today really was the straw that broke poor Shi-hyun’s back.  Everything he believed, everything he had lived for, all those days spent in the underworld, all those years spent living like a dog… were for naught.

There’s a weird pull to this story and its characters that can’t be described in words.  The most representative example has to be Safari, whom I both hate and love in equal turns.  I trust him about as far as I can throw him, and yet I feel for him.  Until recent episodes, he was such a riveting character because of his unflappable calm, his carelessly tossed words holding so much venom and a wealth of meaning, and his unfathomably quick – and brilliant – mind.  But when he was abandoned by Busan, and we were given a teensy glimpse into a wronged past, I actually felt sorry for him for the first time.  And then today, when he and Auntie said goodbye without a word to that effect…  Gah, it was just so heartbreaking and chilling and just too much for words.

Just when I thought I finally had a handle on the incredible journey that is Heartless City, a whole new can of worms is opened up.  I know, I should have known better.  With only six more episodes allotted to us, we open a new door and are primed to step past the threshold.  Hold onto your hats, everyone.  It’s gonna be a wild ride. 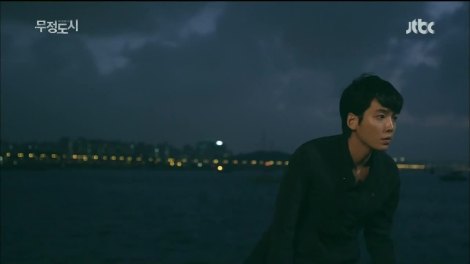