This movie was really hard to watch. I watched the first 20 minutes then went out to meet Pinkblossom. She told me it was dark, and that she couldn’t watch it. But I already started it, so I thought I would just finish it. It was really difficult. The scenes were so graphic, so realistic. I spent 25% of the movie with my eyes closed and the sound muted, so I didn’t have to see or hear what happened. But I got the message. This movie was truly one of the most powerful Korean movies I’ve seen. I’m still recuperating at the moment. 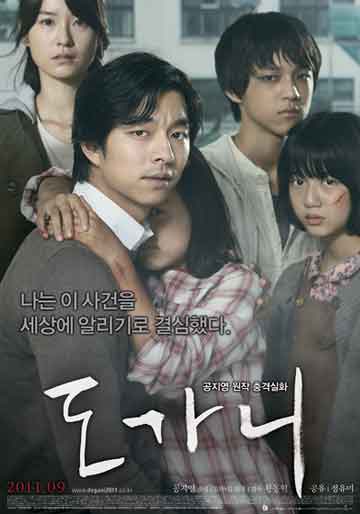 Kang In-Ho, played by Gong Yoo, is a new art teacher at a school for hearing-impaired children at the rural city of Mujin. On the way to Mujin, In-ho gets into a small car accident and meets Yoo-jin, played by Jung Yu-mi, a worker at the Mujin Human Rights Center.

In-ho enters the ominous school, where the first order of business is meeting the principle and the director of administration, creepy identical twins. Subsequently In-ho is pushed to hand over $50,000 in bribe money to work at the school. In-ho’s mother produces the money by taking out her house deposit. Ever since In-ho’s wife passed away, his mother has been taking care of In-ho’s young daughter who suffers from asthma. In-ho’s mom puts on the pressure to bring home some income.

In-ho starts to notice how the students seem removed and distant. He witnesses the brutal beating of a male student Min-soo (Baek Seung-hwan ) by fellow teacher Mr. Park. That as he leaves the school, he hears a girls screams from the girl’s bathroom. He attempts to see what is happening only to be stopped by the night guard. The next day, he sees one of the students, Yoo-ri (Jeong In-seo ) sitting on her window ledge in her 3rd or 4th story dormitory room. He runs up and pulls her back into the room, only to notice the bruises on her face. Yoo-ri brings In-ho to the basement where the dorm manager, the principal’s stepsister, is pushing Yeon-doo’s head into a washing machine. Yeon-doo (Kim Hyeon-soo) is Yoo-ri’s friend and In-ho’s student. In-ho calls Yoo-jin to investigate the matter. They soon find out that the dorm manager is the principal’s lover and Yeon-doo was sexually assaulted. Upon questioning Yeon-doo reveals the principal was the one who sexually assualted her, and that he has raped Yoo-ri as well. They later find that Min-soo and his dead brother were also abused by Mr. Park. In-ho struggles between doing what is right and getting money for his family.

The ensuing trial and testimonies of the children are graphic. They demonstrate the unfairness and corruption of the Korean legal system and the problems in the education system.

The symbolism is really powerful in the opening. As the movie opens, we just see the fog rolling in over Mujin. And it seems to cover and engulf the whole city. This seems to reflect the whole movie and the wrongdoings of the school officials. It is as if all the wrongs they committed were covered up and swept away by the fog. In-ho, Yoo-jin, the kids, and the protesters from the deaf community are in the same way muted and covered over, their voices unheard and unnoticed.

The opening scene also shows In-ho speeding toward Mujin entering a dark tunnel and swerving to avoid an oncoming car, only to slam into something. This is juxtaposed with flashing scenes of a young boy stepping onto a railroad just as an oncoming train zooms nearer and then it also slams into the boy. And the camera pans to the boy’s shoes and then his limp body, finally flashing to the dead rabbit In-ho runs over. We later find out the boy is Min-soo’s brother.

The use of light and dark are incredible as well. About of quarter of this movie is shot using horror movie techniques, dark hallway, green lights, and flickering shadows dominate the flashbacks. But the moments of light and happiness is what really hits you in the guts because there’s a glimmer of hope and you see that the children can be happy, that justice can be reached. Then the lights go out and we are plunged back into darkness.

I think this movie is artfully made, although the rape scenes are horrific and unbearable. The child actors are truly amazing. I can’t even bear to watch and hear what the scenes were like but they acted these scenes out. It only shows what the real children went through. The ending really hits home and makes us think hard. Hopefully the movie will spur the government into further action, get justice for the kids, and prevent this from happening in the future. I highly recommend this movie as hard as it is to watch.