Now that we’ve made the long-awaited time jump, we need to reestablish all of the characters in their new places in life before moving forward.

3 years later.  Eeeee!  Papa Lee is working for a moving service and looks happy, even singing along to CNBLUE hahhaaha (*wink wink* for Sung-jae aka Jung-shin).  He and Sang-woo get along well, and all I can say is Awww.  I’m glad that Papa Lee at least has Sang-woo.

Seo-young has become a federal judge, while Woo-jae has become the vice president of Winners Group.  Aaack, where’d the ‘stache go?  He’s combining his love for film production with his responsibility to the company, just as he vowed many years ago.  Sung-jae, meanwhile, got into college (yay!) and is the pretty-boy loved by all the girls in his classes.  LOL.  Uuunfortunately, it looks like he ain’t doin’ so well in the grades department – can’t change a tiger’s stripes, eh? – and President Kang has threatened to ship him off to the military if he doesn’t get his grades up.  LOL.

Woo-jae and Seo-young are pretty darned cute – or more like Woo-jae is still madly in love and still chasing after Seo-young.  He wants to have dinner with just the two of them tonight (in celebration of his successful project to fund a film), but she reminds him that Thursdays are her day to cook dinner at home.  Well, it turns out Mama Kang is disgruntled – though, of course, she would never use so crass a word 😉 – that Seo-young is so perfect in every way.  LOLOL.  Mama Choi is still holding her tongue while playing the kind friend to Mama Kang, and it seems she’s still eager to marry off Ho-jung to the most eligible bachelor possible.  Some things never change.

Looks like the same comment about change can be extended to Ho-jung, who has come back to Korea unexpectedly – and with a new boy to boot.  Mama Choi runs about the house, frantically trying to clean before the potential son-in-law arrives, and when Ho-jung finally pulls into the driveway, Mama Choi hesitantly greets Tommy… who turns out to be none other than Choi Kyung-ho, Ho-jung’s half-brother (Director Choi’s son from his first marriage).  He’s… an interesting character (and I mean “character” not in the story-sense).  Kyung-ho hasn’t been home in seven years (he lived in Korea), and his wife died six years ago from cancer – the latter which the parentals are learning for the first time.  He’s a doctor and has decided to stay in Korea for good – and in the Choi home – much to Mama Choi’s shock (and disgruntlement). 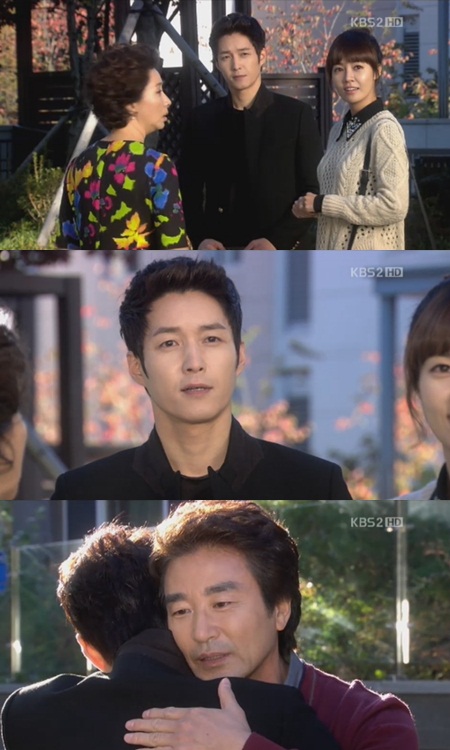 Sang-woo is a resident, working at the same hospital as Mi-kyung.  Eee!  And oh my gollies, they’re absolutely adorable!!  They met again at the hospital where they’re doing their residency, and have been secretly dating.  He wants to make their relationship public and take her home, but Mi-kyung is still hesitant – and part of it is that she hasn’t told him about her family.

Woo-jae picks up Seo-young at the courthouse, eager to celebrate, but she tells him that they’re going home.  The two lovebirds set Mama Kang on edge, and it doesn’t help when everyone raves about Seo-young’s cooking – despite it being the first time she has tried this recipe.  LOLOL.  Oh, Mama Kang, I love you so.

Well, there’s a reason Sung-jae’s grades aren’t up to par – he’s spending his time at an acting school.  Hahaha.

Seo-young works deep into the night (she has an important case), and Woo-jae works out in the family room so as not to disturb her.  Gah, why are you such a perfect husband?!  Mi-kyung agrees with the almighty pinkblossom that her bro is pretty darned whipped, but she claims not to be jealous – ’cause she’s got a boyfriend just as charming as her bro.  Well thank you very much for unnecessarily rubbing that in my face.

Ho-jung slips back into her old life, meeting up with her friends, who say that everything is planned and under control.  Say what?  Ho-jung goes to the hospital and is welcomed with open arms as a volunteer – which is all a ruse to be close to Sang-woo.  Hahahhaa.  She runs into Mi-kyung – literally – and makes her promise to keep their run-in a secret.  I can’t wait to see what happens when they realize they both like Sang-woo.

Continuing with the theme of no change, Mi-kyung meets up with Sun-woo, who shows an unnatural amount of interest in Woo-jae.  Gah, girlfriend, just get over him already.  He’s a married man!  Mi-kyung, whom I’m really liking more and more, tells Sun-woo not to even think about contacting her brother.  Argh, the fact that Sun-woo is still in the drama scares me – she’s probably gonna be at the forefront, helming the crusade to unearth Seo-young’s past.

Papa Lee gets ready to go on a hike, and Sang-woo needles him, asking if he has a new girlfriend.  He always go hiking once or twice a month alone, never letting Sang-woo or his friend join him.  Papa Lee responds that he ain’t gonna find a new lady friend because he feels sorry to his late wife.  Awww.  Sang-woo follows out Papa Lee and talks to Mr. Yoo (Papa Lee’s friend), who asks Sang-woo if his sister really isn’t coming back from America.  Sang-woo is naturally confused, and Mr. Yoo says Papa Lee told him that his daughter was never returning to Korea – she experienced too many difficulties and too much heartache in Korea, so she’s staying in America for good.  Sob.  But Sang-woo doesn’t know that Papa Lee was at Seo-young’s wedding, and as his face falls, he narrates:

I didn’t know that that was what Father thought.  Over the past three years, Father never once asked about Seo-young.

Flashback 1: Papa Lee numbly sits in front of the TV and Sang-woo brightly tells him Seo-young just called, saying she arrived safely in America.  Oof.  Papa Lee tells him to be quiet so he can watch his program.

Flashback 2: Sang-woo’s graduation day.  Sang-woo gets off the phone with a friend and tells Papa Lee that Seo-young called to congratulate him.  He fibs about her being busy, but Papa Lee just brushes it off and changes the subject.

He became even brighter, perhaps because the pressure he felt towards Seo-young was gone.  He silently worked without discrimination, and he paid off all the Jeju Island debt.

Papa Lee gets off the bus and walks along the street.

In the beginning, I felt sad about the criss-crossing between Father and Noona: Father, who came back to us too late; Seo-young, who didn’t want to look back at such a Father.  Father was too late, and Seo-young was too exhausted.

Woo-jae and Seo-young leave the house together to enjoy a tennis date.

As I watched Father, who had unburdened himself of Seo-young and become lighter, I realized that peace in one’s heart was ultimately most important to parents, too.  I realized that they are people, just like me.

Gaaaaaah, Papa Lee is watching Seo-young from afar as she comes out of the house with Woo-jae, smiling brightly.

I believed that perhaps it was fortunate that Father forgot Seo-young.

As Seo-young and Woo-jae happily get ready to leave, Papa Lee softly smiles…

I can’t watch this anymore.

Gah, I just can’t handle it.

This episode was more of an introductory episode – or re-introductory, I suppose – to bring us up to speed on all the changes wrought over the past three years.  For the most part, people didn’t change very much – they just occupy different places in life and in the social world.  Not much growth or change has occurred, except perhaps with Papa Lee.  I feel like I repeat myself quite a bit, but this has just got to be said: Chun Ho-jin is the bestestest.  He’s so understated most of the time, and sometimes I foolishly wonder if he’s lost his touch.  Seriously, foolish foolish foolish.  The way he hid himself behind the pole, the soft smile and look of wistful, heartbreaking longing as he watches Seo-young…  Gah, I’m in tears.  It really made me think about my own relationship with my parents… and how very wrong we can be a lot of the times.  We might think we’re all grown up and mature and whatnot, but sometimes we simply just don’t know the depth of our parents’ love for us.  Sang-woo still gots a lotsa learnin’ to do.

As for the story, I really just can’t handle the heartache that’s to come.  I can see the writer piling on all the love and sweet moments and cuteness and eeeverything to paint the perfect married life for Seo-young and Woo-jae – all so she can ruthlessly rip it away from us.  Seriously, I hate you.  Just get it over with already.  It hurts less when you rip off the bandage nice and quick like, Ms. Writer!  Do you hear me?!  Yeah, I know you’re determined to make my life miserable by stretching this out as long as you can, but be warned: I for seriously am starting to fall for Rascal Sons.  At least that show doesn’t make me apprehensive and neurotic and all-around devastated.  I’m giving you fair warning.  Make it quick so we can work on rebuilding the OTP’s relationship.

Side Note: I feel like I’m ramblin’ on about whatever I think of most of the time, and I’m getting quite lonely all by my lonesome~  I’d love to hear what y’all are thinking and feeling and aaaanything at all!  Please shaaaaare and discuss away!! 😀 😀 😀

Side Note número dos: Thank you for all of your patience, truly.  I’m terribly behind on a lot of things after that second trip last month, but I am chugging away, so please bear with me.  Thanks again! 😀 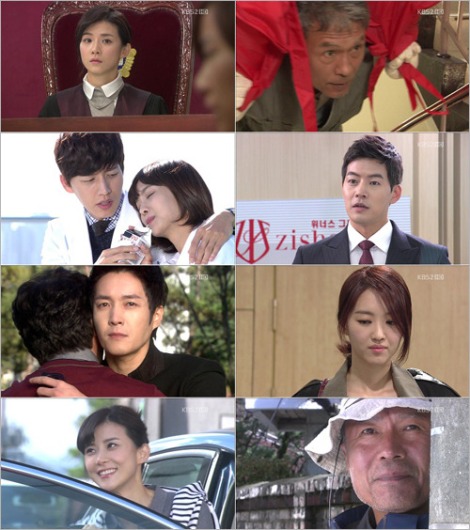 35 responses to “My Daughter Seo-young: Episode 11”