Things are starting to get a move on in Rascal-land, though we viewers see things much more clearly now than the characters do.  If only we could jump into their world and bonk some heads together~

As I mentioned in the Weekend Dilemma: Decision post, these are gonna be mini-mini-caps, so please feel free to ask any questions or make requests.  And, of course, please share your thoughts with us! 😀

Min-ki (Son #2) kisses Hae-in while she’s asleep, then berates himself for the misstep.  They finally make it out of the backwoods come morning, and Hae-in makes her dutiful phone call to fiancé Jin.  When she and Min-ki have a yummy breakfast by themselves, though, she asks him not to tell Jin (because she feels sorry Jin couldn’t join them).  Hae-in seems much more determined to marry Jin than he is her, which I find… interesting.  Min-ki starts avoiding his friend (and Hae-in) but is about as successful as pinkblossom getting on a treadmill.  Aka: Good luck.  He takes Hae-in out to buy a new camera, and the outing morphs into a date.  They go on a bike ride together once Hae-in caves to the temptation, and she asks him not to tell Jin that she rode a bike (she doesn’t want to do things Jin can’t do).  That’s the second time, girlfriend, that you’ve asked him to a secret from Jin… 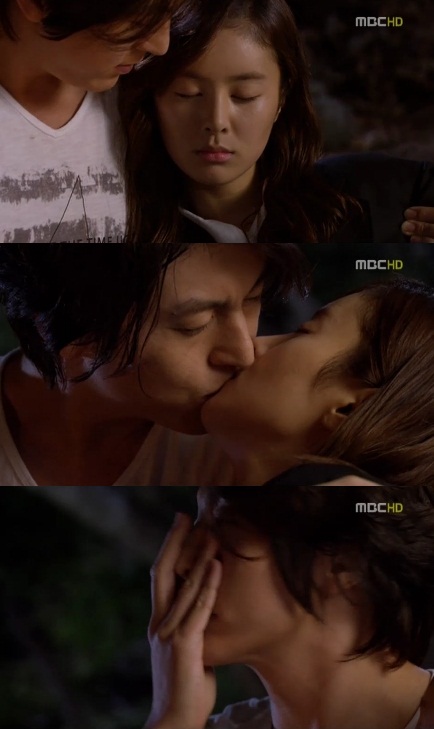 In-oak complains to Song-hee (her sister-in-law) about that annoying, irresponsible man Hyun-ki (Song #1), and Song-hee jokes that In-oak must be interested in him.  Heee I agree.  She goes to visit her newly leased office space (for her piano academy), and she’s horrified to find out her space is literally right across the hall from Hyun-ki’s dentist office.  Hahahaha.  Hyun-ki takes Ah-ram (his daughter) to the newly opened restaurant, and who should he meet but In-oak and Dabin (her son).  The kids want to eat together, so they awkwardly join parties.  There’s a special going on for a family of four, and In-oak lies to the waitress that they’re a family, which the goody two shoes Hyun-ki can’t allow.  They get into another argument then go home that night and both rant about that annoying person they keep running into.

Seung-ki (Son #3) spends a miserable night locked in the storage room – which I say he totes deserves – and Mi-rim cries alone at home.  Poor girl.  Min-ki finally rescues him in the morning, but he doesn’t seem to have learned his lesson much.  Mama Lee video-calls him just when he meets up with yet another girlfriend, and he pulls his usual hilarious antics trying not to get caught.  Feeling out of sorts (ha! You ain’t got no reason to feel out of sorts!), Seung-ki asks Mi-rim to postpone the day they file for divorce… so he can party it up with his girlfriend.  Oh my gawsh, you are something else.  Mi-rim is pissed, though, and tells him that she’s heading over to his family’s house, which sends Seung-ki into major panic mode…

To Seung-ki’s (#3) great relief, neither Dad nor Eldest Brother are home, and he and Mi-rim agree to meet the day after tomorrow to file for divorce.  He asks why she didn’t tell Papa Lee the truth, and she says it’s her last act of kindness – if she tells the truth, he’ll be lucky to remain on the family register, much less move back into the family home.  Sigh.  Seung-ki, I can’t believe you’re letting someone like Mi-rim go.

Hyun-ki (#1) and Min-ki (#2) find the boxes of Seung-ki’s stuff in the storage room and realize their maknae has gotten into another fix.

Min-ki’s editor/publisher begs him to write another novel, and he reluctantly agrees.  Turns out Min-ki’s writing under a female pen name because no one wants to read a male romance author.  Hey, people love Nicholas Sparks!  And… uh… okay, maybe we are a bit biased.  But anyhoo, Min-ki learns his editor is looking for a web designer, so he hooks up Hae-in with a new job.  The tres amigos celebrate over lunch, and Jin asks Min-ki to share his studio (working studio, not bachelor pad) with Hae-in.  *face palm*  Are you trying to hook them up or something?!  Min-ki, obviously, is uncomfortable with the idea and makes some lame excuses.

Hyun-ki feels bad about the things he said (after learning that In-oak is a widow), and he’s awkwardly standing in front of her piano school entrance when he hears loud voices from inside.  In-oak is upset that the painters ignored her directions, and Hyun-ki attempts to come to her rescue.  His good intentions kinda… ‘backfire’ and he ends up helping In-oak repaint the walls.  He tries to help her hammer in a nail and epically fails again.  Hahahaa.  In-oak helps him bandage up his finger, but they’re still more annoyed at each other than anything else.

Seung-ki, Mi-rim, and Bo-ram (their son) celebrate Mi-rim’s birthday, but what should have been a happy day is instead overshadowed by all the heartache and hurts Mi-rim suffered over the years.  They officially file for divorce the next day, and though Mi-rim has been the one pushing for it, she cries alone in the courthouse bathroom.  Seung-ki, too, doesn’t feel as light-hearted as he had expected.  The antidote?  Go to Jeju Island with a girlfriend.  *face palm*  Mi-rim overhears his phone call and leaves in tears, but not before giving him a good beating.  He mopes over a drink, and we get a flashback to their college days.  Seung-ki desperately fell in love with the beautiful Mi-rim, who had no interest in him.  Even back then, he was attractin’ the ladies.  At a new student ‘induction’ outing, a sunbae kept pressuring Mi-rim to drink, so Seung-ki came to her rescue by claiming to be her boyfriend.  She denied it, and the sunbae scoffed at Seung-ki’s lie, so he planted one on Mi-rim as ‘proof’ of his claim on her.  Seung-ki took a totes drunk Mi-tim back to school that night, and their classmates found them asleep next to one another the next morning.  Shocked and embarrassed, they ran out of the classroom, and Seung-ki hesitantly asked if she wanted to date him for reals.  Thus began their courtship, and all I can say is: Awwww, how cute.  And awww, how sad that he ruined something so sweet. 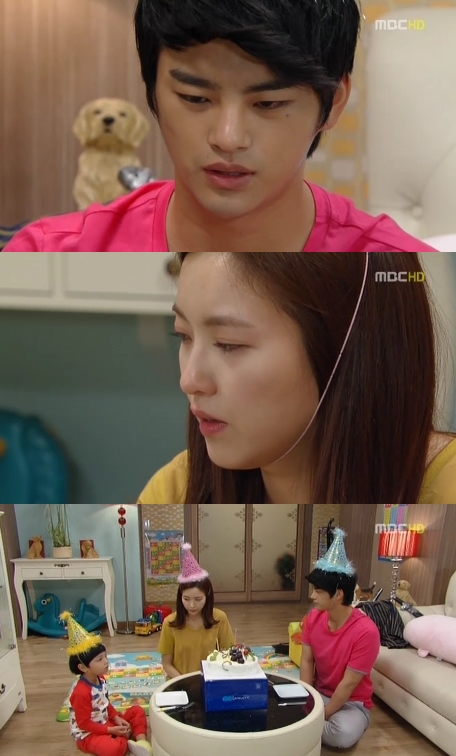 Early the next morning, Hyun-ki is coming home after a nice run when he almost gets run over by In-oak, who’s in a rush to get to the hospital.  Da-bin cried all night because of a toothache, and Hyun-ki tells her to go on ahead to his office.  He’ll get his office key from home and meet her there.  She offers to drive him to his house instead, and they race off.  Uuunfortunately, Hyun-ki walks into chaos: Seung-ki let slip about the divorce and Papa Lee is letting him have it.  Hyun-ki and Min-ki try to stop Papa Lee, but Seung-ki doesn’t help matters by whining that he’s the only son to have gotten all of Papa Lee’s philandering genes.  Hahahaa.  They finally manage to separate father and maknae, and Papa Lee laments that if Mama Lee finds out, it’s not just Seung-ki who’s dead – they all are.   Hahahahaahahaaa.  How much do I love that the greatest reason for Papa Lee’s anger is his fear of Mama Lee’s reaction?  LOLOL.  In all the ruckus, though, Hyun-ki has totally forgotten about Da-bin, and In-oak storms into the Lee residence and drags Hyun-ki out… 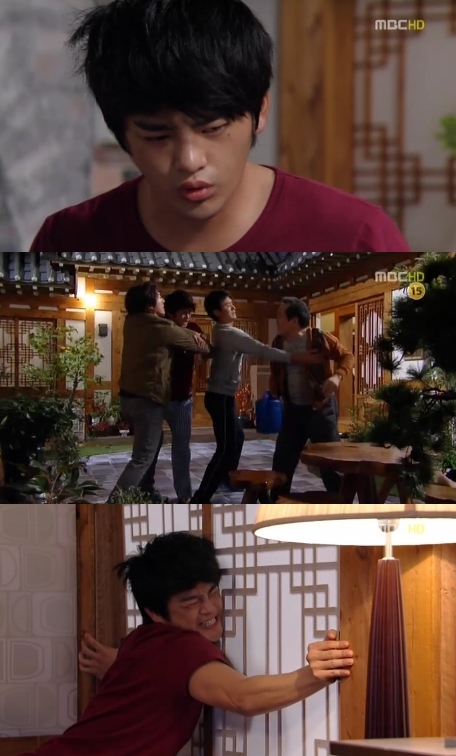 People often joke in Korea that women who (only) have two sons must have committed some major crimes in their past life, and a ‘propaganda’ slogan used to be “Without making a distinction between son and daughter, let’s just have two and raise them well.”  With that in mind, you can see the humor in Rascal Son’s tagline, “Making a distinction between son and daughter, let’s not have three sons!”  For seriously, these three sons all present a headache for Mama Lee in one form or another.  Papa Lee is like another recalcitrant son, too, so I guess Mama Lee actually has four migraine-inducing sons.  What did the poor woman do wrong?!

All three sons are so different in disposition and nature, I marvel that they were born and raised by the same parents.  Hyun-ki is such a dork, Min-ki is frustratingly frustrating, and Seung-ki is on another level.  Though Seung-ki is SO immature and totes worthy of head-bonking, I still feel the most frustration whenever Min-ki’s story is being told.  And I love Ryu Soo-young, so you can only imagine how frustratedly frustrated I am.  Yeah, I’m spoutin’ all kinds of frustrations and making new words out of frustration (the latter clause is meant both ways).  My fav is still Hyun-ki + In-oak, and Hyun-ki in particular.  He’s such a goody two-shoes, but not without emotions, and he’s horribly NOT adept at ANYthing.  Seriously, the finger-smashing with the hammer was So.  Funny.  But I think I feel the most for him because he’s still so desperately in love with his wife.  Seriously, just watch him right before he closes the picture frame each night – his face is filled with longing, sorrow, and pure love.  Gawsh, I’m choking up just thinking about it right now.  It’s the romantic in me, idolizing a forever kind of love that lasts beyond death.  Until, of course, it gets in the way of my OTP getting together.  Then I’m all for burying the past and moving on with the new.  Heh heh heh.  But for seriously, I am in love with Hyun-ki and his undying devotion, and I hope that everyone can experience the same in their own lives.  *blows love fluff to you all*