A quick note: I usually write up the mini recap each day while watching the episode.  Some days I’m more verbose than others, so there’s a bit of an … uh… imbalance in lengths of each mini recap, as you may notice below.  It’s not necessarily a reflection of how good, bad, or comment-worthy an episode is~  Except for Episode 60.  But we’ll get to that later.  If I skipped over a part you were curious about, please feel free to ask away below in the comments section! 😀

Episode 57: The scumbag tells the witch he’ll give up Ki-chan to stay together with her.  But the witch says she can’t give up the boy because it’ll just become an excuse for the scumbag to see In-hye.  The witch demands that the scumbag allow her to handle everything to do with the divorce.  These two make me wanna barf.  Mama Kim arrives, and let’s just say it ain’t a pretty scene.  Oh my gaawsh, Mama Kim brokenly asks what she has to do for the scumbag to come home, for the witch to let go of her son.  She leaves in tears and misses her bus stop again…

Hyun-tae asks Secretary Yoon to look for In-hye and Ki-chan.  Yoon advises against it, since he has to report everything to Madame President, but Hyun-tae says unflinchingly he has nothing to be ashamed about.  “Report to the President,” he says.  Love that confidence!  Ji-eun continues her creepers status, stalking In-hye as our heroine attempts to apply for jobs here and there.  In-hye applies to work at Hurom Juice Café, which is owned by H.Farm(!!), and Ji-eun tells the manager to hire her.  I knew iiiiittttt!!!!!

Ji-soo gets into another fight with her mom over the pregnancy and Auntie+Uncle continue their courtship.

Hyun-tae goes to see the company’s Juice Café that’s undergoing remodeling… which is where In-hye just started working!  Ji-eun, of course, did not expect this development, and she panics like crazy…

Episode 58: Ji-eun ‘successfully’ maneuvers Hyun-tae around the Juice Café so he and In-hye never meet.  Aarrggh.

But no need to fear, our hero ain’t gonna be stopped by the annoying ex!  Hyun-tae finds In-hye’s old hometown, which holds sweet memories for him.  Aww.  In-hye picks up Ki-chan from his preschool but the creeper hired by the witch has already found the mother and son, and he starts snapping away on his camera.  Hyun-tae gets an idea and decides to check out her old home…  Smart man, my friend!  You’re much better suited to be her hubby!

Mom Min sneaks into the newlyweds’ room to look at the ultrasound picture.  Hahah she’s so cute.

Mama Kim has lost her way in an unfamiliar neighborhood and her head starts to hurt…  Oh noooes.  She’s apparently in the right neighborhood but she can’t find her way home and she can’t even remember the name of their porridge restaurant.

The scumbag has also come to In-hye’s hometown… Uugghhh Hyun-tae, find her first!!!  Hyun-tae wanders around until he finally finds a place he recognizes!  Cue a suuuper cute scene from their past when In-hye teased him about being bad with directions.  She taught him a cute way to count steps… which is what Ki-chan likes doing!!  Aaaahhhh!  And then AAAAAAHHHH Hyun-tae finds In-hye and Ki-chan!!!  Ki-chan is surprised and delighted to see Hyun-tae and asks how he found them.  The answer?  Absitively adorably sweet: “I followed my memories.”  Aack!  [The term here he uses for “memories” is “choo-eok” (추억), which is the term In-hye had attempted to teach Ki-chan when they first arrived at her hometown.  It means memory/recollection/reminiscence, but it’s a bit more than that… it’s a good memory, one you treasure, one that makes you nostalgic for those times captured in your memories.]  At In-hye’s concerned look, Hyun-tae reassures her that he came alone (aka minus the scumbag) so she needn’t worry.  Eeee!

Papa Kim and Uncle pick up Mama Kim from the police station and take her home.  A funny side note: Uncle makes a glib remark on his way out, which is totes an ad lib by Yoon Da-hoon (the actor playing Uncle), because you can totally see the police officer fail miserably trying not to crack up.  Hahahaha.

In-hye, Ki-chan, and Hyun-tae enjoy a refrehsmnet out in front of their rooftop home, and we learn that it’s ben ten(!) years since Hyun-tae’s known In-hye.  He half-teasingly tells her he’s a bit disappointed she didn’t seem to have trusted him enough to tell him her whereabouts.  “I was ready to act as an Oppa.”  AAAAACCCKKKKK!!!

The scumbag, unfortunately, has decided to bring his unwelcome presence to In-hye’s hometown, and he correctly finds her old apartment building.  He heads up… until he hears the sounds of Hyun-tae laughing with In-hye and Ki-chan.  Serves you right, loserbutt!  Uuunfortunately – or perhaps fortunately? – the creeper photographer captures all of this and sends the photos to the witch.  Said witch cackles gleefully at the ‘sketch’ pics of Hyun-tae hugging Ki-chan, thinking of the scandal it would cause if she gave these pics to the press.  But she chokes on her ear-grating cackles when she sees the scumbag in the pictures…

The scumbag quietly leaves after hearing the laughter of Hyun-tae, In-hye, and Ki-chan.   The witch, of course, calls him and asks where he is.  He had told her he was going home (Kim family home), but she saw him in the pics at In-hye’s hometown.  When she prods him with question after question, he lies through his teeth, which sends her off her rocker.

Hyun-tae says good-bye to In-hye and Ki-chan and gives In-hye medicine and bandages for her finger (she cut it at the Juice Café earlier that day).  He’s SUCH a sweetie.  The look on his face just slays me.

The Kim family members suggest Mama Kim get checked out for her memory lapse, but she refuses, saying there’s nothing wrong with her.  She looks a bit afraid/worried, though…

The witch confronts the scumbag with the pics and they have their usual fight.  Why do you guys take up my precious OTP’s screentime?!?

Madame President has an apoplectic fit about Hyun-tae continuing to concern himself with In-hye, and he tells her that he, too, doesn’t truly know what he feels for In-hye.  Aaaaackkk!!!

Auntie got into a car accident so Uncle goes to pick her up and take her home.  As she gets out of the car, she gives him a peck on the cheek, which Mom Min witnesses.  Hahahahaa these three are just hilarious.

The next morning, Chi-do reluctantly tells Mama and Papa Kim that he saw the witch at the courthouse filing divorce papers as well as requests to take Ki-chan away from In-hye.  He tells them that it’ll be hard for In-hye to keep Ki-chan…

Our heroine meanwhile has to go to work but the babysitter hasn’t arrived yet.  Ki-chan says not to worry since the babysitter said she was on her way, so In-hye tells him to be careful until the babysitter comes and heads out.  Oh noes, this isn’t gonna end well.  Yep, as if conjured up by black magic, the witch shows up at the rooftop home and bangs on the door, telling Ki-chan to open up.  He refuses and frantically calls his mom, but In-hye is busy working and can’t hear her phone.  The witch calls the scumbag, telling him In-hye irresponsibly left Ki-chan alone at home, which sends him racing there as well.  Ki-chan finally calls Hyun-tae, who’s picks up in the middle of a meeting.  Eeee!  As soon as he hears what’s happening, he runs for his car, totally ditching the meeting.  Aack aack aaack aaaaackkk!!!  Ji-eun tries to stop him, but he brushes her off and races away.  Madame President arrives just as he’s leaving.  Hyun-tae frantically calls In-hye, and someone finally sees the ringing phone and tells In-hye. She flips out when Hyun-tae tells her what’s going on and she abandons her work to go to Ki-chan…

Episode 60: Yikes yikes yikes yikes yikes.  This episode is just so ugly on so many levels, I don’t particularly want to dwell on it.  But here are the bare bones: The scumbag reaches Ki-chan before In-hye or Hyun-tae can, so the two evils take the little boy.  In-hye and Hyun-tae go to the witch’s apartment to get Ki-chan back, but that just gets nasty.  Long story short, In-hye is unsuccessful in her bid to see/keep Ki-chan and Hyun-tae takes her back to the Kim home.

Mama Kim has a very serious memory lapse, completely forgetting that she was headed to see Ji-soo and Min-do.  She comes home from a shopping spree and is understandably confused by Papa Kim’s inquiries about her visit to the Min home, then outright flabbergasted when she sees all the food she made (for the newlyweds) but can’t recall ever cooking it.  Eeek, not good.

In-hye comes into the Kim home, dazed and completely out of it.  Mama Kim runs out to meet her, fussing and tearing up and asking what in the world is happening.  In-hye tells Mama Kim that she’s decided to finally divorce the scumbag, then passes out…

Episode 56 was so amaztastic that I had to give it its own post, so you can only imagine how excited I was for the rest of the week.  Things were finally lookin’ to get under way.  Now that we’re here at the end of the week…  asdfghjkl!@#$%^&*.   Uh, you can figure out the translation yourself.  This week had A LOT of really precious moments between In-hye and Hyun-tae, which had me squealing like a pig rushing to its feed.  Or me on any day in front of food.  Hmm, I wonder what that says about me and pigs.  Let’s not go there.  But yes, this week had some pretty darned good moments, but ay carumba what went down in Episode 60 was so nasty it kinda overshadowed all of my rainbows and unicorns from Episodes 57-59.  I ain’t one to wish ill on others, but the witch is just… bleeeeeeeepity bleep bleep bleeeeep.  And the scumbag ain’t any better.  I truly value the sanctity of marriage vows and believe people should do all that is possible to keep their marriages together, especially if they have children.  But here, it’s just getting ridiculous, and poor Ki-chan is the one suffering as a result.  I fear for this poor little baby.

Mama Kim is rapidly deteriorating, which is also scaring me A LOT.  I have no idea what they’re trying to do…  My best guess is still that In-hye will no longer be her legal daughter-in-law but she’ll still remain by Mama Kim’s side to care for her.  As for the In-hye + Hyun-tae line, things are progressing as expected.  In-hye is working for H.Farm (though indirectly at this point), and Madame President is keeping her there so she can keep tabs on her.  I’m excited to see In-hye move up the proverbial ladder of success and get her happily ever after with Hyun-tae.

Here’s to hoping that the nastiness gets resolved ASAP(!!) and the best part of the drama can begin. 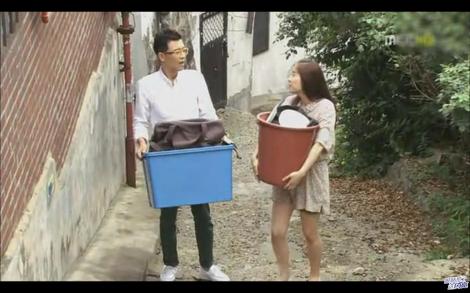