Episode 46: Mom Min is still heartbroken after marrying off Ji-soo and walks into the living room the next morning to discover: 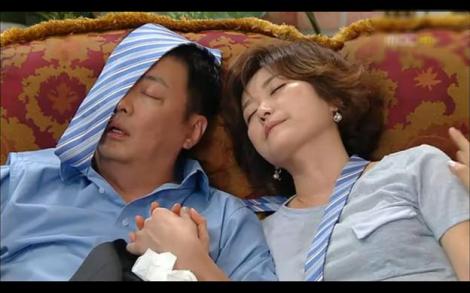 Pops Kim tells Mama Kim that the witch who ‘saved’ In-hye is the one Sang-do’s having an affair with, and she’s also his college flame.  Mama Kim goes to meet the witch and gives her one satisfying, scathing dressing down.  Sang-do finds out he’s on hold to be transferred to the boonies, which is tantamount to getting fired.  Hyun-tae goes to meet In-hye first thing in the morning to tell her Sang-do is at a motel, not with the witch.  He urges her to go to Sang-do and bring him back home, because the loser butt is ‘having regrets.’  Yeah right, good luck with that one.  Madame President holds the press conference and Hyun-tae is none too pleased about the ultimatum issued by the madre.  Over in happy land with the newlyweds, we get the staple Kdrama scene: 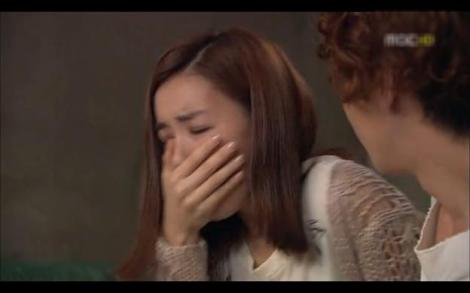 In-hye goes to Sang-do’s motel and gains a glimmer of hope when the man at the front desk hands her the room key, telling her Sang-do is expecting her.  Oh noooes, the person he was expecting is the witch.  This isn’t gonna be pretty.  In-hye organizes the room, puts a fresh change of clothing in the drawers, and even cleans the bathroom – it’s such a Korean ‘wife’ thing to do.  My heart is breaking…  And of course, on cue, the witch shows up.

Episode 47: Another heart-breaking scene between In-hye and the shameless witch, and Sang-do just heaps onto the sins he’ll pay for.  I can’t watch this.  Aauuuggghhhhh.  In-hye takes Ki-chan to a Jjim-jil-bang (spa/dry sauna and popular place to kick back) and tries to broach the idea of living apart from one another.  Poor Ki-chan’s response quickly nixes that suggestion.

The newlyweds attempt to come to terms with the big news: Ji-soo is shocked and worried and all-around flustered, but Min-do is just plain ol’ excited.  Hahaha sums up these two so perfectly.

The best part of the episode: Ji-eun is being her usual whiny self and demands to know why Hyun-tae refuses to leave the bank.  “Is it because it’s where that woman (In-hye) used to be?”  The answer is in his eyes.  Oh my gawsh, I knew he loved In-hye, but THIS is just AACKKK!!  I can’t even form words.  He works at the bank because of the memories it holds of his first love.  OH MY GAWSH, can it get any sweeter than this?!?!!!!  And then oof!  He straight up tells Ji-eun that there was not a single moment he was happy while being married to her.  Ouch, that one was pretty bad, even for Hyun-tae.

In-hye comes home with Ki-chan and tells Mama Kim about what happened at the motel that day.  Her decision: “Mother, I want to get a divorce.” 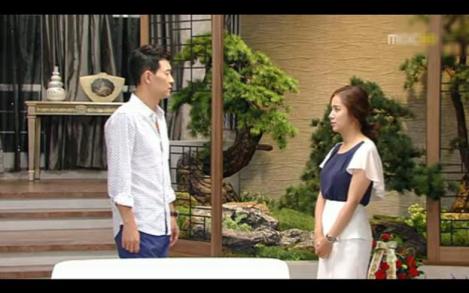 Episode 48: Mama Kim tries to persuade In-hye not to divorce Sang-do, but the scumbag is determined.  Hyun-tae gets into an argument with Madame President about In-hye and working at H.Farm, and the stress sends her into a faint.  Everyone gets a good shock, and Do-hee tells Hyun-tae that his mom has lupus.  Lupus – I feel like I’m watching House!  Min-do and Ji-soo continue to try to cope with Ji-soo’s morning sickness, and Auntie/Uncle flirt shamelessly.  In-hye drops off Ki-chan at Preschool and tells him she’s going to the bank, but she goes to receive free legal services.  Ki-chan, unfortunately, attempts to follow In-hye…

Episode 49: Mama Kim tries to talk sense into her son, to no avail.  In-hye learns she’ll probably lose custody because she’s not financially independent/stable.  Min-do and Ji-soo return from their honeymoon, but instead of going to her home (as according to custom) they decide to go straight to his.  Mom Min, who was eagerly expecting them, is none too pleased.  And yay for Min-do’s haircut and darker color!!!  LOVE it!

Ki-chan miraculously finds his way to the bank, but he’s snatched up at the entrance by the witch.  Everyone goes into a panic looking for him while the witch attempts to bribe him with food.  She brings him home, just as the newlyweds have arrived, as well as Auntie with food from Mom Min.  Awkwaaaaard.

Episode 50: Just a continuation of the mess that’s been created, nothing groundbreaking in this episode.  The newlyweds come home, Sang-do continues to be a first-class jerk, In-hye cries some more, and Auntie+Uncle get plastered and wake up in a hotel room beside each other the next morning.  The lupus news finally forces Hyun-tae to cede to his mother’s wishes and he decides to enter H.Farm.  In-hye meets with Sang-do and agrees to give him a divorce, on one condition…

The highlight of the episode had to be Min-do’s altercation with Sang-do after learning the latter was planning to get a divorce.  Everyone in the Kim family has scars from Pops Kim’s affair, but Chi-do and Min-do especially were left with deep scars.  In Episode 45, Chi-do’s begging Sang-do not to leave was absolutely heartbreaking.  And Min-do’s response in this episode was just as good.