Just some thoughts about Episodes 15 for Ghost, Gaksital, and I Do I Do

I was feelin’ the procrastination breeze quite a bit today.  Hmm… perhaps I should call it the procrastination tempest, then?  Oh, I know: the Kdrama maelstrom!  So, in deference to the nature of the day, I decided to watch not just 1, not just 2, but ALL THREE mainstream Wed-Thurs dramas.  And that doesn’t include my daily fix.  More on that soon.  Anyhoo, as I mentioned before, I don’t keep up with this batch of Wed-Thursies, but I figured why not just jump into them today?  Commence much eyebrow frowning and lifting and all-around wiggling as I attempted to follow these quite complex storylines (well, at least for Ghost and Gaksital).  And don’t forget lots of sighing as the madre tried to explain, unsuccessfully, 15 episodes worth of plot.  Anyhow, here’s my weigh-in at this quite-past-halfway-point in all three dramas.

So Ji-sub is not So Ji-sub?!?  Whaaat?!?  That was really a big mind-blow, not that it had all that much to do with the mystery or the bug (electronic, not living) story today.  All those they’re-gonna-get-caught! scenes were pretty fun… until the 100th time they did it in a single episode.  But hey, that trick never gets old so might as well use it – there’s always the possibility they’ll actually get caught.  Or not.  Anyhow, I was staring at G.O of MBLAQ for a while, trying to figure out if it really was him minus the goatee.  Answer: yes.  It was so weird to see BIG’s Kyung-joon’s hilariously awkward uncle being serious and on the straight and narrow here, but that man can pull off anything.  But my big star of today?  Eom Ki-joon.  That man really deserves a leading role.  (Also, whitecarrot would kill me if I claimed So Ji-sub.)

I know lots of you wub this drama like no other, and I’m not here to poop on your Rollercoaster.  But I just wanna say… uh… that fight scene with Mok-dan and La-la was really awkward.  *peeks out from behind protective door*  And seriously, Mok-dan drives me up the wall.  Girlfriend, seriously?  I can maaaybe handle you walking around without twenty bajillion masks and sunglasses and scarves and whatnot.  But primped to the nines?  Me no understand.  And that cliffhanger?  You better weasel your way out of that, Kang-to, or I lose all faith in you.  Last point: Poor Shun-ji.  I know he’s being a bas*@#$ of the first order, but I just feel so bad for him and his unrequited love – or more like love stomped on, burned, drowned, and tossed into the compost heap.  My wild guess: in the end, Shun-ji’s gonna die to save Kang-to.  Oh, and La-la will prolly end up doing somethin’ to save Kang-to, too.  I guess everyone’s gonna save Kang-to… unless he dies?  Sorry, sorry, okay, yeesh, I won’t go there. 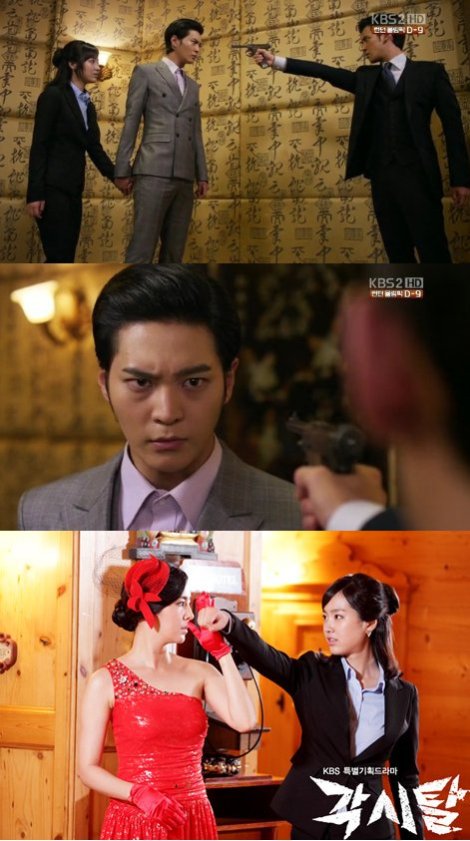 This drama’s the one I actually watched for 4 episodes before my interest started dwindling…  I was excited for Kim Sun-ah and curious how she’d make things work with Lee Jang-woo, because she WOULD make it work.  That lady’s got chemistry in spades.  Plus, Park Gun-hyung looked absolutely hilarious in the previews.  There’s nothing glaringly bad or even slightly problematic about this drama.  Well, except for that daughter-of-the-president girl whose name I don’t know and don’t wanna know.  But aside from her, the drama hasn’t got any problems from what I recall.  It just kinda… lost my interest.  Today’s episode was strange to watch because I missed all the lovey-dovey developments between Kim Sun-ah and Lee Jang-woo, but they were pretty darned cute at the end when they showed up in matching outfits.  Perhaps if I find myself with another crazy weather day, I’ll backtrack to where I left off and watch this drama for realsies.  Then again, lots of crazy weather prolly wouldn’t sit too well with my taskmasters.  Umm, leukemia? 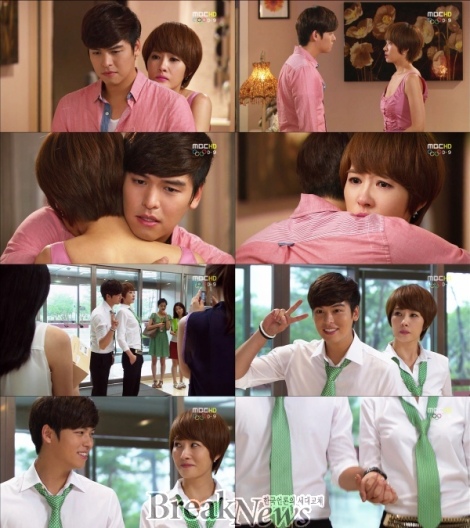 Ha!  That reminds me of a conversation I had last month with a friend who’s not a regular drama-watcher (gasp!).  Friend’s friend is a Lee Seung-gi fanatic and told Friend to watch The King 2 Hearts.

Friend: So yeah, I just watched The King 2 Hearts last week.  It was okay, I guess.

Friend: What’s it about?

pinkblossom: Well, I don’t want to spoil anything for you, but the premise is a time jump.  Time-jumpers are all the rage in Korea right now.

Friend: Really?  What happened to leukemia?