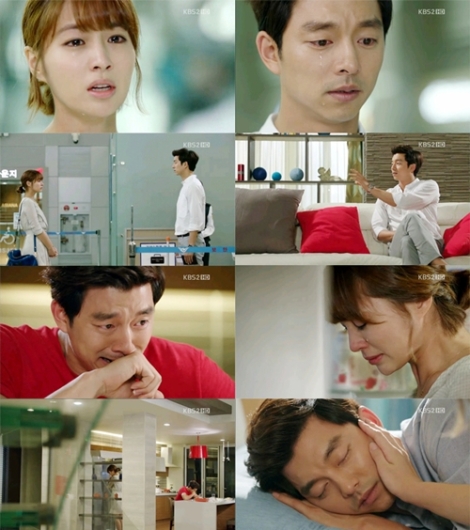 Wow wow wow wow wow.  All I can say is that this was a Gong Yoo highlight episode.  Tears, tears, and more tears that twisted my already twisted gut like a pretzel.  Or maybe a licorice?  Plot-wise, as whitecarrot mentioned, not tooooo much happened, but I’m glad for Kyung-joon’s sake that he got to hear Da-ran confess her love for him.  I don’t recall her ever actually saying “I love you” (it was understood but implied and couched in crazy Hong-Sister-metaphors), so I’m glad it happened.  Though you may know someone loves you, hearing the words do make a difference.  But then he has to decide whether to essentially give up his love by losing his memory?!?  Aaack this is killing me.  But seriously, that last breakfast scene?  That was a BREAK-UP!!  Oh my gawsh, I can’t believe they just broke up like that.  I’m still in a dither ’bout that one.  The “agitation” part of “dither,” not the “excitement” part. 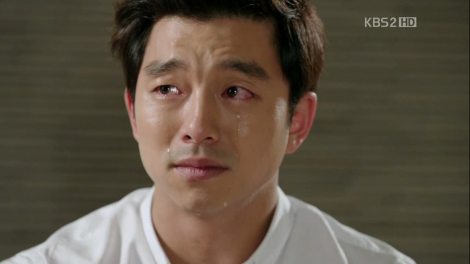 Otherwise, I feel like we finally arrived at the critical point, body-shenanigans-wise.  I’m assuming this is the climax?  Please don’t say we still have another mountain to climb.  (Remember those mountain-valley diagrams we learned in school that describe every plot ever?)  I have NO idea who’s in whose body at this point.  When Gong Yoo woke up at the very end, his expression wasn’t really Kyung-joon-ish, but it wasn’t all that Yoon-jae-like either…  Harumph.  I can see that they’ve tried to mirror (once again) the very first time Gong Yoo opened his eyes and Da-ran called out “Yoon-jae-ssi?”  That time she wanted Yoon-jae.  The second time she called out Kyung-joon’s name and wanted it to be him.  This time she’s also called out Kyung-joon hoping for him, but… if it’s still Kyung-joon, what do we do for the next 2 episodes?  Personally, I want Gong Yoo no matter what, but it makes zero sense to have Yoon-jae end up with Da-ran now.  He was deprived of any story time, so Kyung-joon’s gotta be the end game.  Unless he dies like the wretched 49 Days?  Let’s not go there.  Anyway, that means Kyung-joon’s gotta go back to his own body for there to be stuff to talk about next week.  If he wakes up in Yoon-jae’s body, we’re just rehashing the past 14 episodes.  So story-wise, we’ve gotta move forward.  Then again, this drama’s been a master at spinnin’ its wheels in place, so who knows what’s gonna happen?

I don’t think I’m invested enough in this drama to make accurate speculations, but some interesting possibilities in my mind:

Looks like we’ll have to wait ’til next Monday to see what happens.  Or, Tuesday, I guess.  *waves*  Happy speculating, everyone!