1. Shinhwa Broadcast is being touted as the ‘filial’ variety show of cable channel JTBC.  As mentioned before, Shinhwa Broadcast has been gaining steady viewership and is keeping JTBC’s ratings afloat.  Today’s episode was a parody of A Gentleman’s Dignity: “Shinhwa’s Dignity”.  Last week Jun Jin was out due to a lower back surgery, but he was back in full force today.  Lemme just say, today’s episode was HILARIOUS and Jun Jin was ABSOLUTELY AMAZTASTIC.  Seriously.  Like no other.  Eeee!  I need to do a mini-cap of today’s episode.  It was THAT good.

2. Speaking of A Gentleman’s Dignity, today’s Episode 15 garnered the show’s highest ratings up to date.  It reached a 23.5% nationally (AGB Nielsen) and almost broke 30% in Seoul.  [SPOILER ALERT] The Do-jin+Yi-soo line was a bit slow today, but I think they needed the lull before going all out now that we’re nearing the end.  And for seriously, my heart was thumpin’ like crazy when Yoon asked for Mae-ah-ri’s arm.  SUCH a fake-out, but I betcha that bracelet is in his shirt pocket, right over his sweet little heart.

3. Actress, artist, director, and all-around lovely lady Goo Hye-sun made headlines with her unbelievable report card.  She posted a picture on her Twitter account of her latest grade report, and all Imma say is dang girl.

4. Super Junior hosted Saturday Night Live today and received much attention for the 19+ rating their episode garnered.  I haven’t gotten a chance to catch the episode, but by all accounts it was hilarious and well done.

5. An update on the Park Ji-sung + Bae Doo-na story: Bae clarified today through her agency that she and Park did meet up in London but are “just long-time friends” and were certainly not on a date.  Well, that’s a complete 180 from what they said yesterday.  *in a singsong voice: Like I said, time will tell~

6. And last but defs not least: Tim Tebow won the Best Moment ESPY last night for his Overtime 80-yard touchdown pass to Demaryius Thomas in the AFC Wildcard Game against the Pittsburgh Steelers.  Tebow may have his detractors and his fellow nominees seem to be seriously sore about losing, but that touchdown pass was AMAZING.  I was jumping off the couch (NOT Tom Cruise style) and running around the house and basically going beserk when DT ran into the end zone.  It hurt my heart to see the Steelers knocked out of contention for the Super Bowl, but I had go with Tebow on this one.  Jeremy Lin also won last night for his breakthrough year, the aptly named Breakthrough Athlete award.  Congrats, Tebowmania and Linsanity!

[The touchdown pass is highlighted from 6:52 – 8:00.  Many thanks to CiprianoSenaFamily] 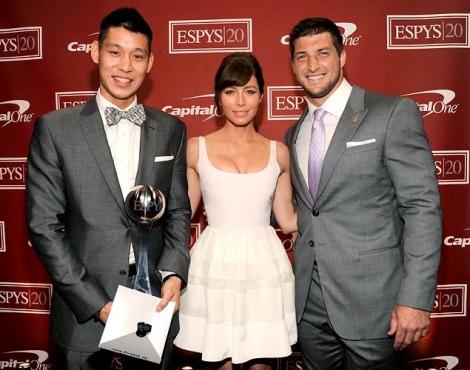