I haven’t watch a JDrama in a while, so I was excited to see a drama with one of my favorite Johnny’s Idol, Nishikido Ryo. However, it was very bland…I couldn’t even finish watching it.

The premise is that Nishikido plays himself as an up and coming idol who is part of the group Kanjani 8. Along the way, he finds his true love, a single mother of three children. He gets married to her and hi-jinks ensue as he attempts to get along with the kids and become a family man while balancing his singing/performing/acting idol career.

So let me explain what I didn’t like about this drama:

1. Nishikido had ZERO chemistry with the leading lady (yah, I still don’t know her name). She was bland. The single mother seemed like an airhead. Even when she had to make big decisions for her kids she just seemed really inconsequential and never really grew in the movie. Plus I don’t understand why she would suddenly declare to her kids that she is dating someone and have the guy move in immediately. Shouldn’t there be some sort of period when you get to know each other? The way they interacted was stiff, and it seemed very obvious that the single mother was much older older and  couldn’t communicate well with Nishikido.

2. Japanese dramas tend to be episodic which I usually like but not in this case. There would be one episode where Nishikido wins over one child, then another, then another. Thank goodness there were three kids or else this drama might be a lot shorter. But it just felt very dry and the main conflict fell apart in the later episodes when the plot line resorted to some random jealous actress who wanted to destroy the marriage between Nishikido and single mother. 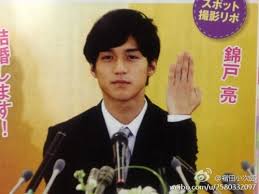 3. Oyah and there was the paparazzi who tailed Nishikido endlessly. Instead of feeling sorry for Nishikido, I was just annoyed at how the paparazzi seemed obsessed with Nishikido (he was more stalker than anything).

4. They made the rest of Kanjani 8 sound like a bunch of lackeys. It seemed like Nishikido was the only star and they all depended on him. Lame!

Either way. I wouldn’t recommend this drama unless you are absolutely in love with Nishikido Ryo. And even then, it would take a lot to get through this stuff.